for 2 pianists, one grand piano, projector, and pre-recorded video and sound

Composer’s note:
Primum Non Nocere (Latin for “First, to do no harm”) borrows its name from the Hippocratic Oath which physicians swear before formally entering the medical profession.   In contemporary American society, chronic illness is too often stigmatized.   From health policy to everyday interpersonal interactions, corporeal failure is conflated with moral failure. As someone who has struggled with a chronic illness for my entire adult life, this indignity has heightened the more mundane burdens of illness: the normalization of pain, the sometimes years-long limbo of diagnosis, the dehumanization, and the shame.  The patient relinquishes agency, as well as all sense of privacy, to a team of doctors, and must trust (sometimes against all odds) that they can provide eventual relief.
Perhaps this explains my own affinity for imperfections and failure in music. For performers, the instrument is an extension of their bodies.  Though remarkable paragons of human ingenuity and design, they are nonetheless fragile, and in need of constant care.  At the same time, as any pianist who has ever broken a string knows, the very act of performance can be the greatest source of stress for an instrument.  Where an audience may only hear the polished, perfected version of a piece during a concert, the performer has wrestled with the many imperfect versions that have preceded it in the practice room.   For pianists, they have played on instruments that may range from concert grands to beat-up practice-room uprights.  The perfectly honed concert rendition of a piece is far from the only version that exists.
In Primum Non Nocere, the two pianists are by turns doctor, caregiver, and patient as they navigate their relationship to the piano.  The four movements from the larger work currently existing :
I. Aphasia
II. Diagnostic Etude 1
III. “Heiliger Dankgesang eines Genesenen”
IV. Diagnostic Etude 2
Each movement creates a specific scenario in which the performer(s) are confronted with the limitations of both the piano, and of their own bodies.  In some instances, they are confronted with specters of perfection or of decay (Movements II and IV). In others, they are  forced to work together to create a comprehensible musical language (Movement I and III). 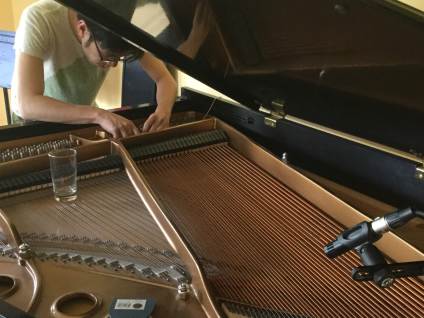 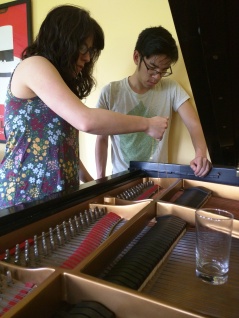